+ Write a comment
Expert review by Jouni
11 months ago

This is my review of Amok Casino.

Here is a history lesson for you. The word “Amok” is derived from Southern Asian Austronesian languages. Mostly heard in the phrase “run amok” this word actually has its origins in Malaysian culture and is used to describe it when someone suddenly goes on a mass assault. What a weird etymology indeed!

Fortunately, Amok Casino is a lot less “amok” than it says on the bill. This casino has been online since the Summer of 2021 and is fully licensed by the Malta Gaming Authority. The company behind the casino, on the other hand, is called Infiniza Limited—a little lesser known casino provider.

What is it that makes Amok Casino tick? We are bound to find out during this expert review!

Looks and feel of Amok Casino

There are at least a couple of things that fit Amok Casino’s peculiar name. One of them is the casino logo that has been spiced up with an explosion of sorts. The other one is the red and orange color scheme, which gives the casino a nice, cool sense of danger and excitement. What this casino reminds me of is a good old-fashioned construction site with all kinds of perils as well as roaring jackhammers. But maybe it is just me!

The single greatest thing about Amok Casino’s looks and feel is the way that this casino has put its games on display. Every slot icon that you see on your screen is accompanied by a certain small number. This number represents each game’s RTP or return-to-player. The higher the percentage, the higher amounts of money the game pays out to its players in the long run. For instance, an RTP of 96.00% means that players are getting an average of 96 euro (or currency equivalent) back for every 100 that they wager. This is theoretically speaking, of course!

As with all online casinos, your Amok Casino experience might differ based on where in the world you are located. Generally speaking, though, Amok Casino seems to have opted for ever-lasting cashback bonuses instead of your normal welcome offers. While there are no direct incentives given to people who have just joined, each customer is still getting a 10% cashback on all of their net losses.

Let us say you lose 200 during some of your very first stints at Amok Casino. That would mean that the casino will compensate you with 20 (200 x 0.10) of your money back. What is more, this weekly cashback is paid out with no wagering requirements, which means that you are free to either withdraw it straight away or try winning once more.

While I would never shy away from a 10% cashback offer, it would have been neat if Amok Casino had something else there as well to differentiate itself from the pack.

Although I was left pining for some actual deposit bonuses or some extra free spins, I was very much impressed with Amok Casino’s games selection. Overall, there are dozens upon dozens of game studios here with well over 3400 games to choose from! And here I am usually only playing one or two games at a time during my sessions…

Here is an example of some of Amok Casino’s top game providers: NetEnt, ELK Studios, Pragmatic Play, Relax Gaming, Push Gaming, Microgaming, Nolimit City, Big Time Gaming, Red Tiger, and Play’n GO. The only one of my favorites that were missing was Quickspin, but chances are even this provider will be added to the already impressive selection one of these days!

If you want to hear a gaming recommendation, be sure to test out Pirate Kingdom Megaways. I had a lot of fun with this Iron Dog Studios slot the other night—although I did eventually end up coming short… This game has an RTP of 96.20% as you can clearly see on the Amok Casino slot page.

Live casino tables are also aplenty at Amok, and we have Evolution Gaming to thank for that! Roulette, Monopoly Live, Dreamcatcher, blackjack… They have it all!

Like I already mentioned in the intro of this review, Amok Casino is licensed by the Malta Gaming Authority. This means that players here can safely run amok.

Players at Amok Casino can have a choice between payment methods such as Visa, Mastercard, Interac, iDebit, Ecopayz, Neosurf, and more. Before withdrawals can be paid out, customers need to verify their account details. After this, most requests will be processed almost straight away while others might take up to 5 days to be taken care of.

I approached Amok Casino customer support one afternoon and received support in well under 30 seconds. Support is open 24/7, which means you never need to wait for too long to have your questions answered!

My experience at Amok Casino

As you may know, I am quite a critic when it comes to online casinos. This is because I have seen so many of them and not nearly every single one of them is good. With Amok Casino, however, I was mostly pleased with what I saw.

The good things about Amok Casino include the constant 10% cashback bonus, the amazing array of some of the hottest slots in the biz, the presence of the trustworthy MGA license, and the brilliant idea of putting the RTP for each game on display. These things really more than make up for the fact that there are no deposit bonuses present!

All in all, Amok Casino easily gets my recommendation! 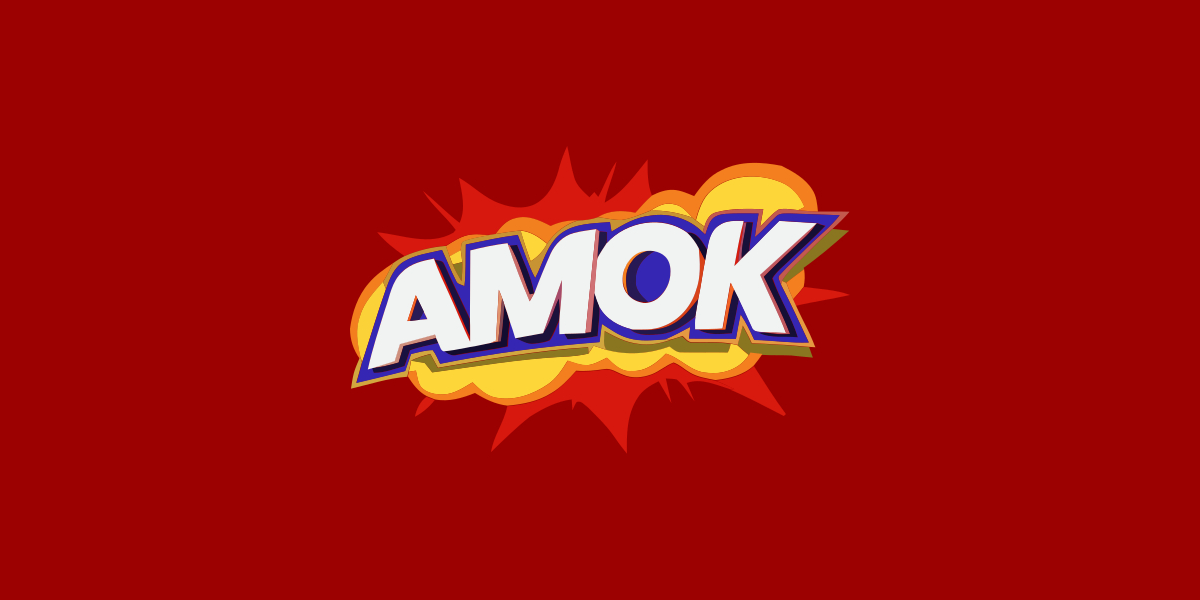 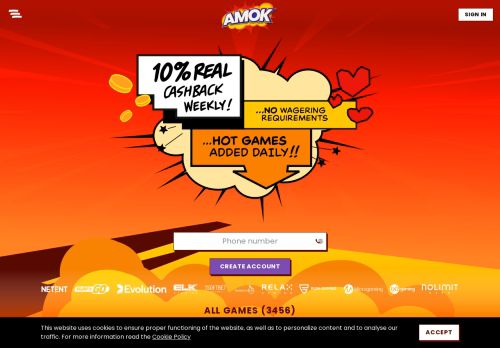 What’s the withdrawal time from Amok?

Amok casino processes your withdrawal request immediately, after that it takes between 1-5 business days before you receive your money.

Where is Amok based?

Amok casino is based in Malta.

What license does Amok have?

Who is the operator of Amok?

The operator and owner of Amok are Infiniza Ltd